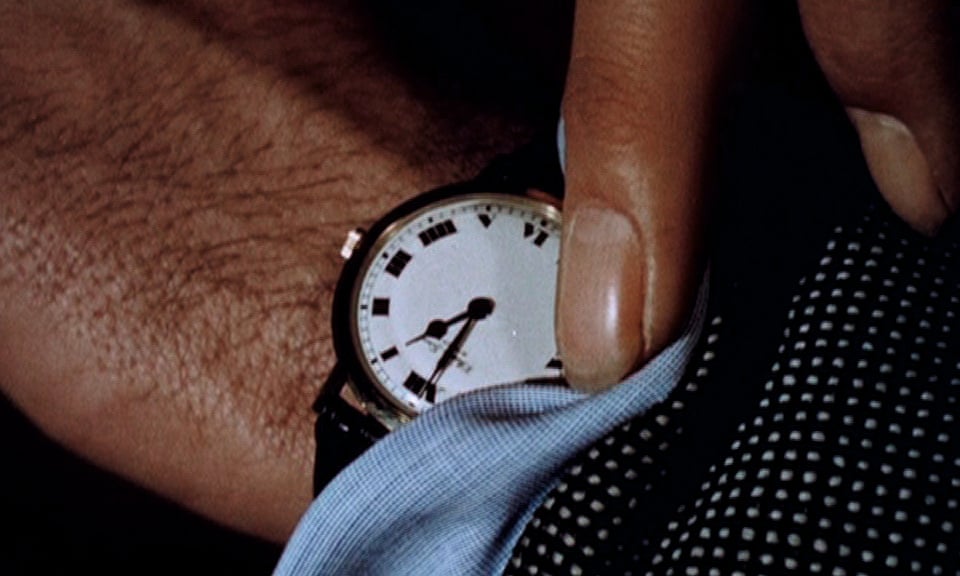 Time: ticking ever onwards, it has long been the preoccupation of human beings, particularly since the national and international standardisation of time in the late 19th and early 20th centuries. Our days are split into hours, minutes and seconds, strictly regulated via the reminders of watches, clocks, bells and timetables.

Time is the subject of Christian Marclay’s cult video work The Clock, on view at Tate Modern from 14th September. Projected onto a large screen in a room laid out like a cinema, the film is a truly extraordinary feat of editing and mathematical precision. The piece is a montage of film and television clips that depict clocks or reference time, cut in such a way that the final 24-hour-long work acts as a functioning timepiece.

The clips are taken from a vast range of cinematic material, from black and white B-movies to art-house classics, from blockbuster epics to romantic comedies. Narratives form and unravel, and visual cross-references spark into view only to disappear again. The piece manages to be both high-energy and slow-paced at the same time, pointing to a key element of the film: the malleability of time.

Watching The Clock is a strange experience. Some minutes seem to last much longer than others, depending on Marclay’s choice of clips and the speed with which he cuts between them. Occasionally, time seems to stand still, only to hurtle on again. Settings and moods dilate and expand before being cut off, humour and pathos change the pace.

Sitting in the dark in front of the film is addictive. The paradox of the experience is that, even though the work consistently reminds you of the time, it’s easy to lose track of it, to forget how long you’ve been watching the clock. Marclay’s work points to our ingrained understanding that cinematic time is not the same as actual time, and yet he also simultaneously subverts this conception.

The gallery will stay open overnight on the first Saturday of October, November and December, allowing visitors to experience the whole film. The fact that the exhibition is free encourages the sort of repeated visiting that The Clock requires. It’s an experience not to be missed.

Christian Marclay: The Clock is at Tate Modern from 14th September until 20th January 2019. For further information visit the exhibition’s website here.

An Adventure at the Bush Theatre | Theatre review
Down to Earth premiere: An interview with Rolf Winters, Renata Heinen and Mark Rylance