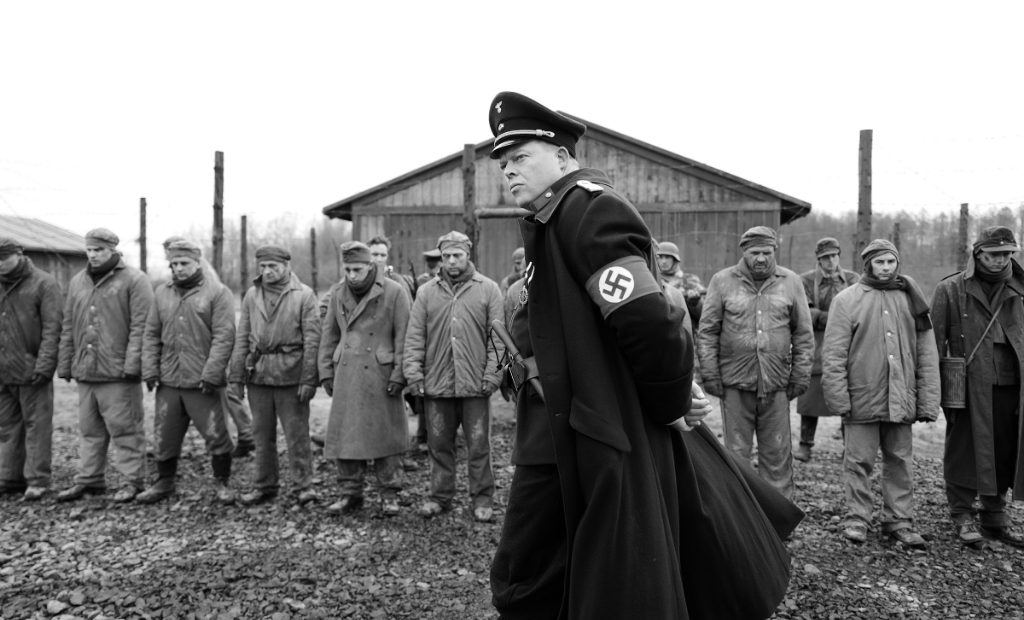 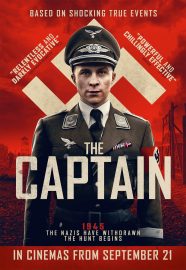 As history shows, the last days of the Second World War were a dark period for the axis forces, fighting to the bitter end, surrendering to the allies or forsaking their unit in a bid for survival. Desertion was not uncommon towards the final weeks of the war, yet was still seen as an act of cowardice in the face of adversity, leading to Nazis hunting down their own soldiers in order to prevent allied forces from obtaining valuable information. It is upon this construct that Robert Schwentke’s German film The Captain lays its foundation, with the Deutches Reich lacerated from corner to corner, her military descending into an all-round chaotic melee.

With tonally rich black-and-white visuals, the film opens on a vast snow-laden landscape, the life and colour sucked from the earth in a bitter reflection of the conflict and blood spilt deep into its soil. On the horizon, a beleaguered figure is hunted for desertion, the predators shooting at his feet and past his head. Barely escaping his pursuers, Private Herold (Max Hubacher) shakily roams the countryside until eventually falling upon an abandoned vehicle holding a chest full of high-ranking Luftwaffe uniform. When another lone soldier called Freytag (Milan Peschel) mistakes him for a Captain, Herold decides to embody the role in an embracing of power, taking a number of rogue soldiers into his newly formed “Task Force Herold” and ordering them onward on a “special mission” in which the hunted becomes the hunter.

It is safe to say that moments of respite are few and far between throughout Schwentke’s The Captain, with its pulsating scenes of thrilling intensity propelled at the audience right from the opening sequence – and made all the more shocking on realising this was in fact a true story. Still, desolate wastelands host chilling and suspense-filled exchanges, before becoming home to violent, bloody ends and it is this element of raw apprehension that makes this wicked true story more than just a reflective biopic simply depicting the events. Schwentke delves deeper into psychological effects of war on the human mind, brilliantly emphasising the animalistic cold-heartedness that consumes even the weakest of souls when anarchy ensues.

The casting is superb, with the youthful Hubacher fiercely delivering an innocent yet chilling performance as the complexly conflicted Willi Herold with admirable conviction. Using the monochrome tones to his advantage, the Swiss actor installs the unnerving and crippling sense of impending doom that was so present during the latter stages of the war into his character’s actions, blending the human will to survive with a splash of psychotic tendencies, piercing stares and an undying longing for power over others not too dissimilar to that of a monstrous serial killer. There are also engrossing representations of the differing effects war can have on human nature, with Frederick Lau’s savage Kipinski countered by Milan Peschel’s Freytag, apparently the only soldier left in crumbling Nazi Germany with his moral compass still intact, and who represents a very different outlook on the horrors of war before falling victim to Captain Herold’s new regime.

The tension sustained throughout the film is dissipated slightly when a full contemporary colour shot – that may have been more suitable with the closing credits – is inserted at the mid-way point, and budgetary restraints do unfortunately mean that some explosive special effects miss the mark. However, the size of the devastation and context of the plot prove so alarming and enthralling that these minor quibbles are easy to forgive. With a raw, grungy score, The Captain is a movie that bombards the senses with no holds barred and to terrific effect, proficiently executing the depiction of a perspective that is so often forgotten where the end of the Second World War is concerned.

The Captain is released nationwide on 21st September 2018.

Watch the trailer for The Captain here: