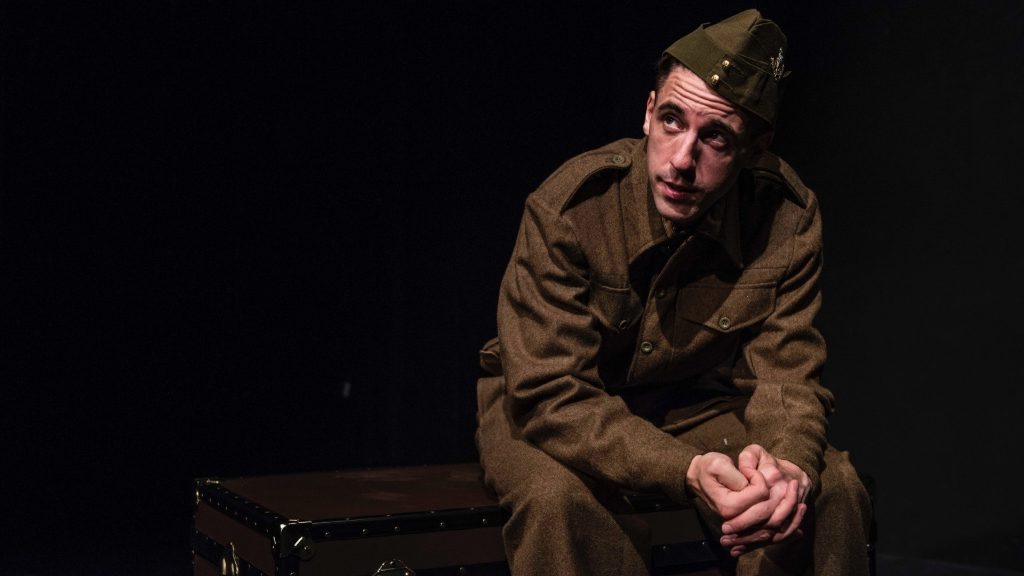 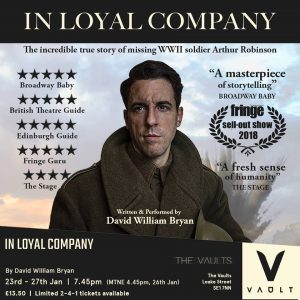 Upbeat swing music plays as Joe, a young packer from Liverpool, stands frozen while the girl he likes dances with his best friend because he didn’t have the courage to ask her himself. Suddenly there is a loud bang and Joe runs outside, steals a motorbike and speeds home to escape the bombs. It’s 1941 and the biggest thing this young man has to worry about is girls and his rotten dance moves. But when Joe’s best friend dies in an air raid he decides to fight back and signs up for the army.

In Loyal Company is a one-man show performed by David William Bryan. This hour-long piece tells the true story of the actor’s great uncle, Arthur Robinson, who was deployed to Singapore and declared missing when Japanese dive bombers attacked his ship.

The performance takes place on a sparse, black stage with a dark backdrop and no props, except a small pile of clothes. But through lighting, sound effects and impressive acting we are transported from suburban Liverpool across the ocean to Thailand in 1943, where dysentery and leg amputations are rife and the soldiers are expected to clear bamboo under the scorching sun.

In one scene, Joe has to jump from his ship into the ocean to avoid the bombs. With blue lighting and deep echoing underwater sound effects, Bryan can make us believe he is underwater without using a single prop.

The actor makes good use of his facial expressions and accents to change character, from the young, earnest and naïve soldier to an upper-class sergeant, a fireman and an old hunch-backed woman. He is a very physical performer who can speak eloquently while doing jumping jacks and shows these people’s physical pain and illness in a way that is believable.

The characterisation of a young soldier who tries his best even in the worst possible circumstances is touching and tragic in equal measure. From Joe’s early descriptions of playing football with the Indian soldiers to dictating an imaginary letter to his mother, where he tells her everything is fine even though he is doubled over with pain, coughing deep from his weak chest and eating maggots, Bryan recalls everything with a hint of hope that makes the circumstances even sadder.

Despite some lighting issues, Bryan never breaks concentration and gives the show his all. In Loyal Company is not an uplifting, feel-good tale that will leave the audience with a warm fuzzy feeling, but it is a respectful, realistic portrayal of war that is honest without pushing any political agenda.

In Loyal Company is at the Crescent from 23rd until 27th January 2019. For further information or to book visit the show’s festival page here.

That’s the best achievement I believe you can have, that the film brings up emotions, makes you shiver inside, makes you ask yourself something: An interview with Nina director Olga Chajdas
An Audience with Yasmine Day | Review