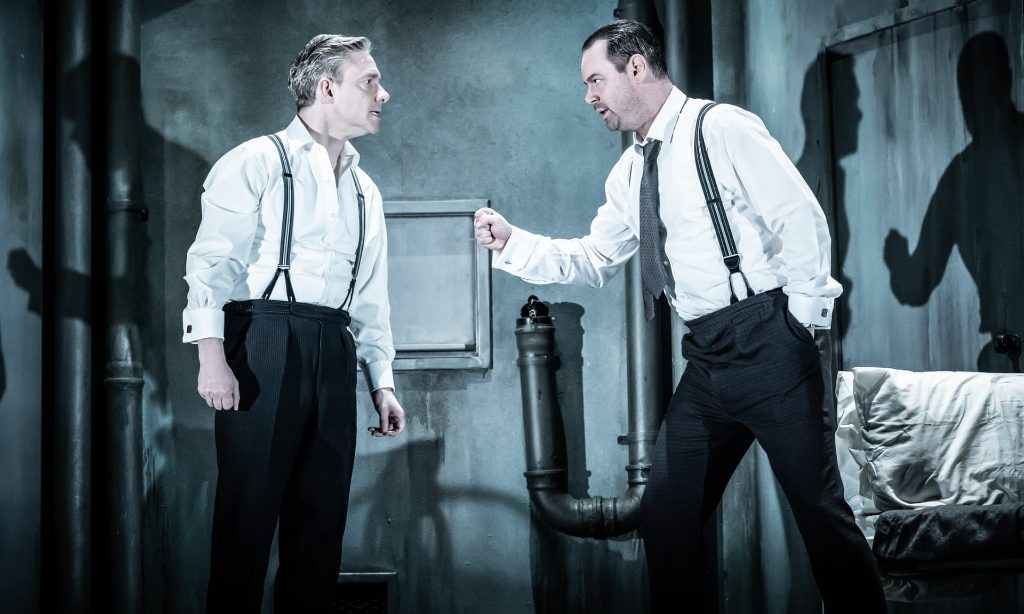 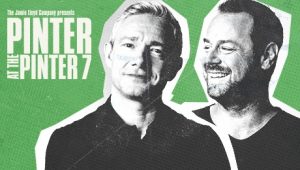 Tonight’s programme dangles the audience from a precipice in a manner so perfectly Pinteresque you half expect the playwright to return to the land of the living just to take another bow. The final instalment of Jamie Lloyd’s Pinter at the Pinter series keeps the theatre teetering on an enthralling tightrope of ambiguity, masterfully mining the subtext beneath the babble of everyday existence.

The director begins his double bill with an exquisite adaptation of 1958 domestic drama A Slight Ache, originally a radio play, which follows well-to-do married couple Flora (Gemma Whelan) and Edward (John Heffernan) as they investigate the mysterious mute match-seller whose presence has become a blemish upon their property. What makes this staging unconventional, however, is Soutra Gilmour’s simplistic set, designed – rather ingeniously – to resemble a recording studio. This decision, along with George Dennis’s use of props to create sound effects, adds layers of artifice and playful performativity, as does the ever-present On Air sign, glowing an ominous red.

Crucially, however, this minimalistic approach also allows the writing room to breathe. As Pinter himself once noted, “so often, below the word spoken, is the thing known and unspoken,” and this is a work that resonates with silence. Deftly constructing a third cast-member from nothing but the loaded pauses punctuating their rambling monologues, the two actors do a commendable job at slowly opening up the cracks in their characters’ feeble facades. Their chirpy, refined exteriors crumble with tragic, well-timed humour as, despite consuming cultures in a laughable attempt to satisfy their colonial appetites, definitive knowledge forever eludes them. Thus, as they clutch comically to their classical upbringing (evoked through Whelan’s passive-aggressive insistence on the correct identification of garden flora and Heffernan’s ridiculously faultless pronunciation of all manner of obscure European spirits) their apparent idyllic union starts to unravel, along with their minds.

Though the couple begin up on their high horses, lording it about in their house on the hill, the piece takes a diving descent into depravity, setting us up perfectly for the second show of the night, which is set in a rather seedier criminal underworld. One of the playwright’s sharpest works, two-hander The Dumb Waiter consists of one contained and claustrophobic act bursting at the seams with comic potential. A potential that Martin Freeman and co-star Danny Dyer realise to raucous effect.

Tensions arise in a small basement room as hitmen Ben (Dyer) and Gus (Freeman) await their next assignment. And in more ways than one, this is a play that’s all about execution. Bringing East End to West End, Dyer’s bristly cockney bravado sits in perfect contrast with Freeman’s angsty and fitful fidgeting. Again, the staging is stripped back to great effect, and the bleak grey prison-like room that confines the characters only amplifies the subtle shades of each performance.

Shifty and unsettled, Freeman flickers and fluctuates between confusion to fear as his long-suffering companion shoots him scathing looks crafted from 24-carat comic gold. The chemistry rewards us again and again, every absurd interjection coaxing out the enduring wit of the script. The fact that the word “scampi” is one of the highlights of the play is a testament both to Freeman’s unshakable comic talent and Lloyd’s acutely sensitive direction.

Despite its short length, sparse set and sparing use of sound, this production teases out the immense depth of Pinter’s drama through every twist and turn, right up to the heart-wrenching climax – for a finale of pure finesse. While on the surface these conversations may seem mundane, The Dumb Waiter plays with the politics of power, and small talk reveals itself to be bigger than we could possibly imagine.

Pinter Seven is at the Harold Pinter Theatre from 31st January until 23rd February 2019. Book your tickets here. For further information or to book visit the theatre’s website here.