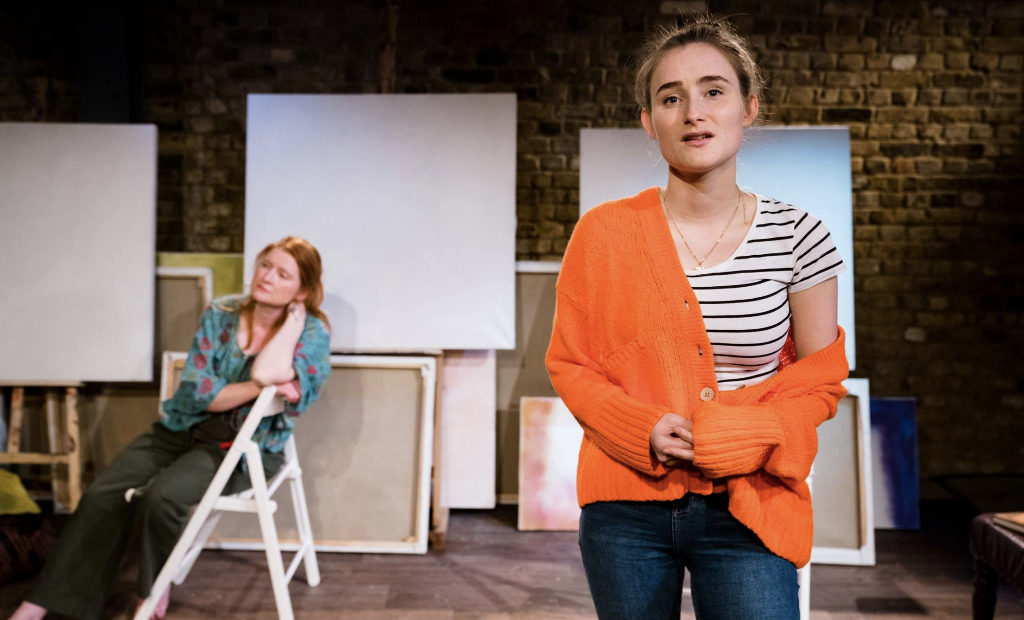 With a brilliant sense of humour that one would expect from writer Katherine Parkinson – who is primarily known for her comedy – Sitting has an interesting premise: here are three characters who are having their portrait painted by the unseen and unheard John. To break the uncomfortable silence, all three reveal hidden truths in the form of well-crafted monologues. The result? A hilarious and surprisingly moving character study.

The production by director Sarah Bedi itself is simple enough. The audience is presented with a bohemian-looking studio with various canvases scattered around the room. There is little involvement in terms of lighting and sound, leaving the actors alone in their pursuit to capture the imagination of their onlookers – and it is here where Sitting is at its best; the whole cast is absolutely stupendous.

Mary (Hayley Jayne Standing) is an ex-punk and a single mother, who struggles with a disturbed family history which breaks the façade of the constantly good-humoured woman. Luke (Mark Weinman) is a good-hearted decorator and expectant dad who is generally unhappy with his life and has a troubled relationship with his father. Finally, Cassandra (Poppy Fardell in her impressive professional debut) is a recent drama school graduate who finds security in a world of make-believe to oppose the harshness of reality.

As the play unfolds, the lives of Mary, Luke and Cassandra are put to scrutiny with a great deal of care, sensitivity and humour thanks to the quality of the writing and the actors’ prowess. All three are believable and would be perfectly enjoyable as isolated monologues. But Sitting takes it even one step further: as the monologues continue, it becomes increasingly clear that both John and his three sitters share an intimate connection, and in doing so raises some important question regarding the connection between artists and their subjects, the healing properties of art, the deep interconnectivity of humans, as well as the difficulties of ordinary life.

Sitting is an excellent piece of fringe theatre which demonstrates Parkinson’s talents as a writer not only of comedy but also of genuinely heartfelt humanity. Enjoyable by any given audience, it will guarantee an evening of excellent entertainment and some moments of profound stimulation.

Sitting is at Arcola Theatre from 10th April until 11th May 2019. For further information or to book visit the theatre’s website here.