Beneath the Blue Rinse at Park Theatre 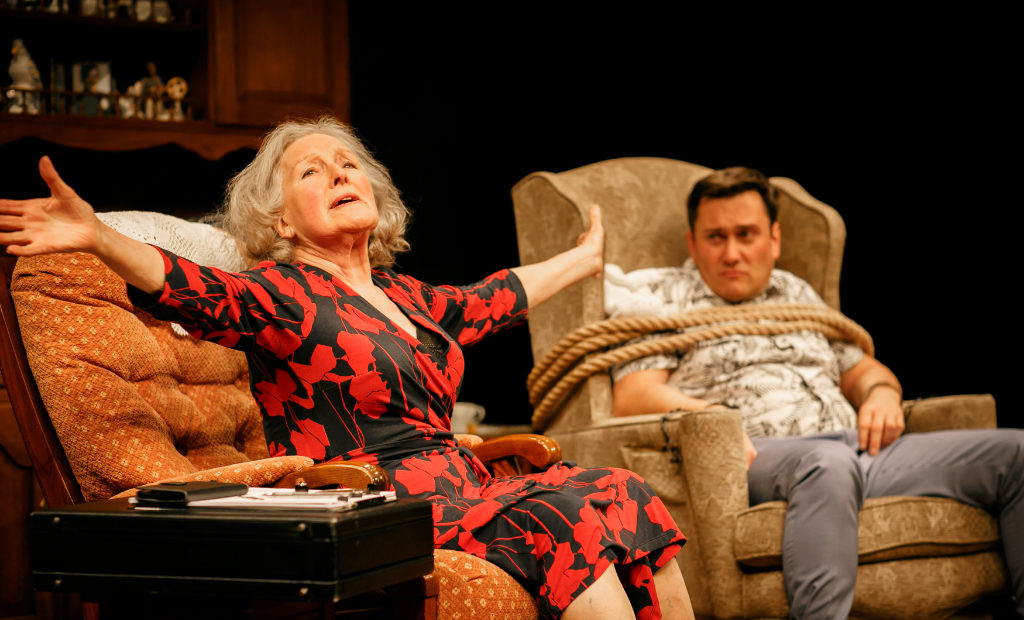 Beneath the Blue Rinse at Park Theatre | Theatre review

Beneath the Blue Rinse

Beneath the Blue Rinse has large shoes to fill. A comedy that toys with preconceived ideas of the elderly and turns all expectations on their head is bound to draw comparisons with the likes of Arsenic and Old Lace or The Ladykillers. While this play never quite lives up to the genius of those two works, it is nevertheless an imaginative comedy with plenty of wit.

Things start out on a good note when Simon (Kevin Tomlinson), a salesman of alarm systems, tries to con the elderly Flora (Marlene Sidaway) into buying expensive gear by lying to her about various crime statistics and persuading her of the quality of his company’s grade b product. The scene is beautifully done – Sidaway is wonderfully sarcastic as she plays along to Tomlinson’s performance, whereas Simon displays a severe lack of self-awareness.

Sadly, the rest of the production never lives quite up to the opening moments. After Flora reveals herself to be a revolutionary fighting for the rights of the elderly and ties Simon to a chair to torture him into changing his ways, the comedy becomes less effective – partly, perhaps, because the script offers several moments of forced preaching. It’s not that the comedy ever becomes bad, per se – it just never quite takes off after the final moments of hilarity, and too much of the humour is based on elderly people being crass and swearing so much it would make a sailor blush (oh my!).

No, Beneath the Blue Rinse is never quite as daring as it would like to be, and a lot of the ground it treads has been covered many times before. But it’s still done with a lot of heart, and a lot of it is still genuinely hilarious. The extremely powerful acting by Sidaway certainly does a lot of good for the play, even as she utters lines that were obviously written by someone not quite in touch with the elderly characters he is portraying.

As such, this is a harmless comedy that will guarantee a pleasant evening. The play won’t change the world of comedy by any means, but it doesn’t offend anybody in the process, and it’s certainly excellent for quite a few heartfelt laughs.

Beneath the Blue Rinse is at Park Theatre from 21st May until 15th June 2019. For further information or to book visit the theatre’s website here.

Beneath the Blue Rinse