Lungs at the Old Vic 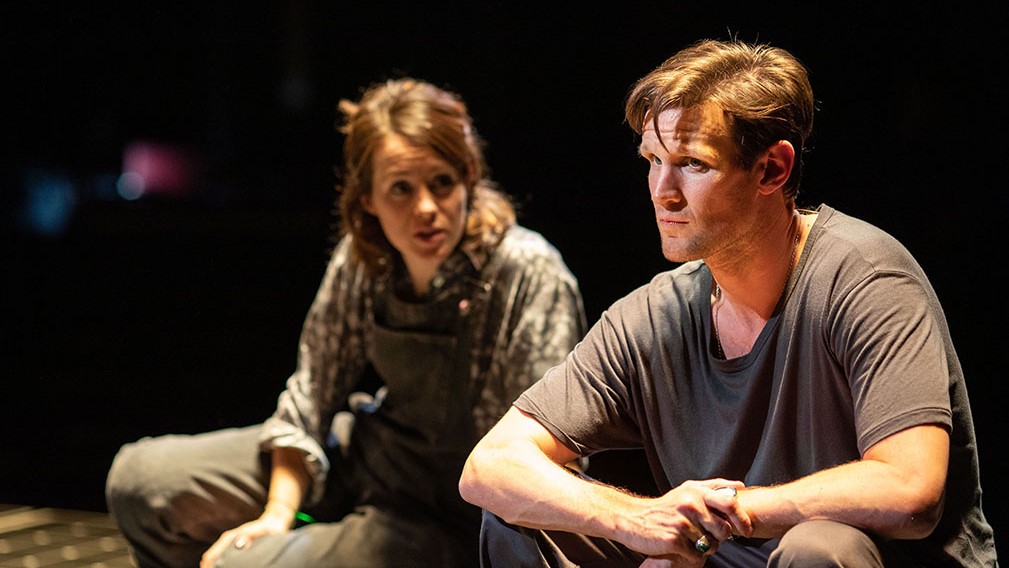 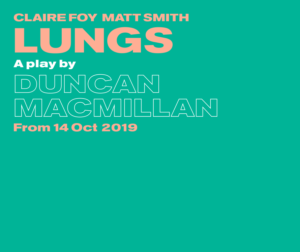 The Crown’s Claire Foy and Matt Smith are reunited in this hotly anticipated play by Duncan Macmillan, the man behind the very well-received People, Places and Things.

Worrying that the world is already overpopulated, turbulent and plagued by climate change, a couple wrestle with the idea of whether or not it’s right for them to have a baby. Considering it premiered back in 2011, the play feels incredibly fresh and even more relevant today in the issues it addresses. As well as carbon footprints, Macmillan examines gender roles, sexual politics, and of course the responsibilities and life changes that come with parenthood.

Rob Howell’s simple costume design allows the characters to feel accessible and recognisable to the audience. Opening with a scene set in Ikea, it’s not long before laughter ensues, and there are a great many laugh-out-loud moments amongst the play’s weighty themes. This is due to Macmillan’s sharp and snappy script as well as the compelling performances of Smith and Foy, who excel in their comic timing.

Viewers of The Crown will be aware of the actors’ chemistry, but on stage and in roles far removed from their royal ones they are electric, clearly relishing the material given to them. Their ability to bounce dialogue off one another at a rapid rate, their use of proxemics and their body language is masterful. Whilst Foy is perhaps offered more to do, Smith often uses his facial expression, his eyes and movement to tell us all we need to know about how his character feels.

As has been done recently in the Old Vic’s The American Clock, the audience sits on the stage and the action takes place almost in the round. Howell’s simple set consists of only solar panels. There are no props and nothing in the way of scenery, leaving the writing – and the two actors’ stellar performances – to do all the talking. And the play has a lot to say. Almost every line of dialogue carries weight, whilst still remaining believably conversational. Foy’s character simply brims with thoughts, questions and ideas, and the actor’s at times frantic delivery, stammering as she attempts to unload everything and dropping the F-bomb like there’s no tomorrow, is amusing and entertaining to watch.

Although the dialogue is very naturalistic, scenes transition into one another without warning, abruptly switching locations and time periods, allowing a fast pace to prevail throughout the one-act play. Arguably the momentum dips slightly towards the end, but it soon picks up with a tender and emotive climax. Director Matthew Warchus is careful to allow the audience time to reflect on some of the heftier issues that are explored. The time-jumps and scene changes also conjure up the idea of humans, and certainly our protagonists, having little control over certain aspects in life, the sparse set and audience seating exposing their insecurities and vulnerabilities.

Lungs is the hottest ticket in town, and theatregoers will not be disappointed by the exceptional performances of Foy and Smith, but it is also a well-written and engaging play that has a great deal to say about the times in which we live.

Lungs is at the Old Vic from 14th October until 9th November 2019. For further information or to book visit the theatre’s website here. 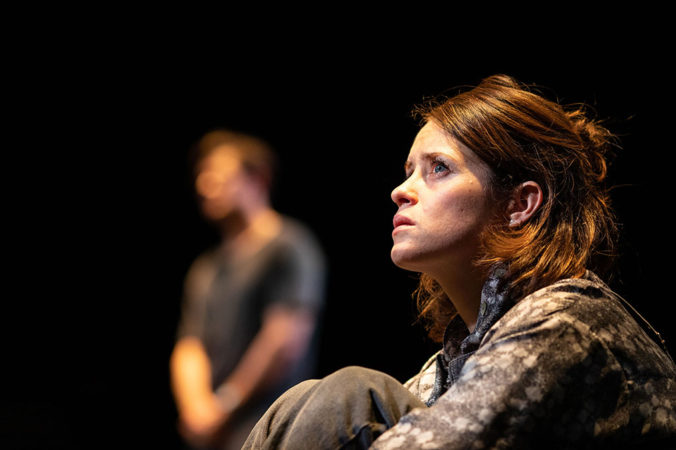 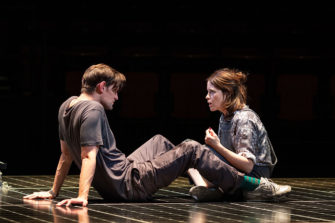 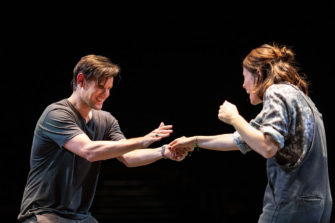 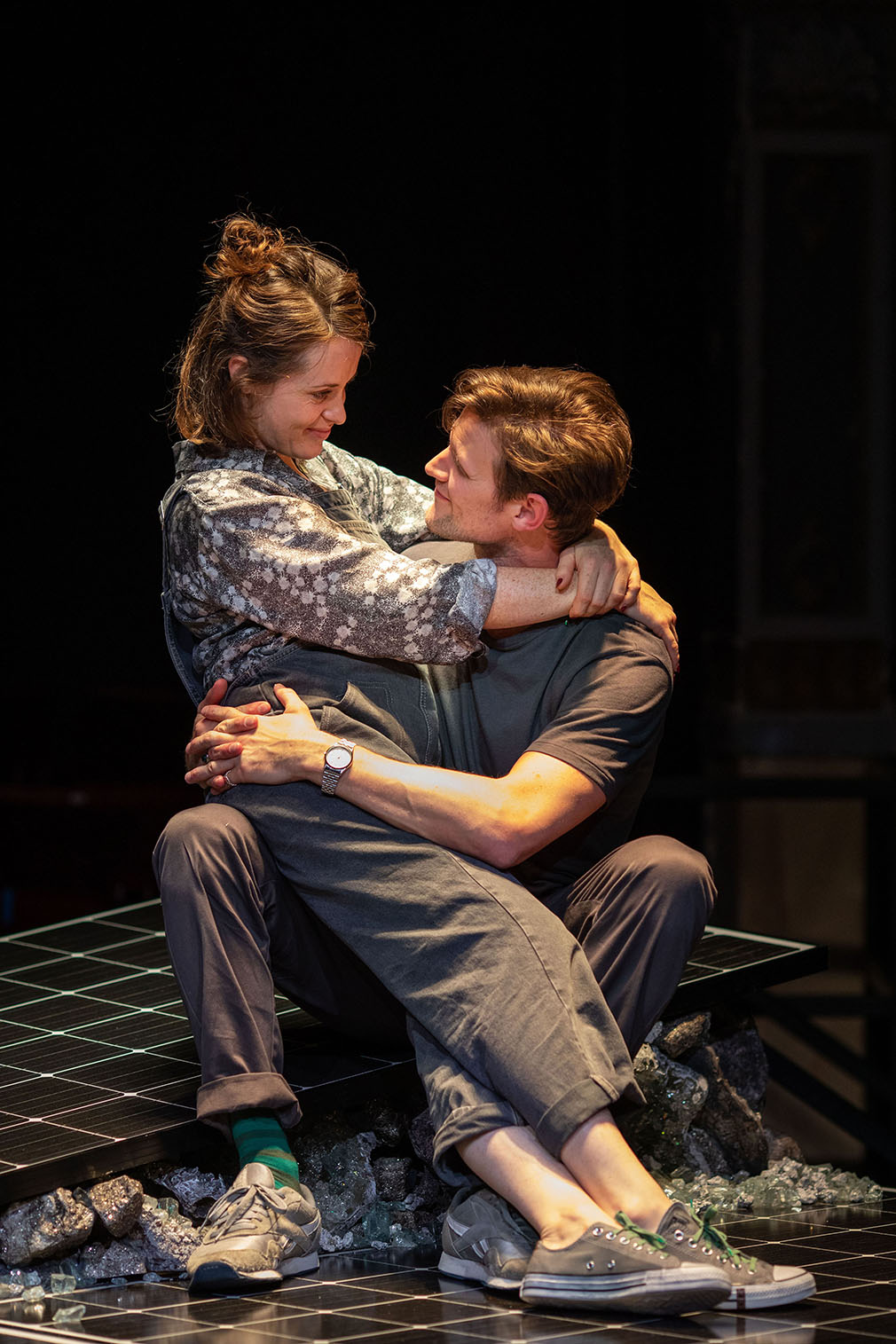