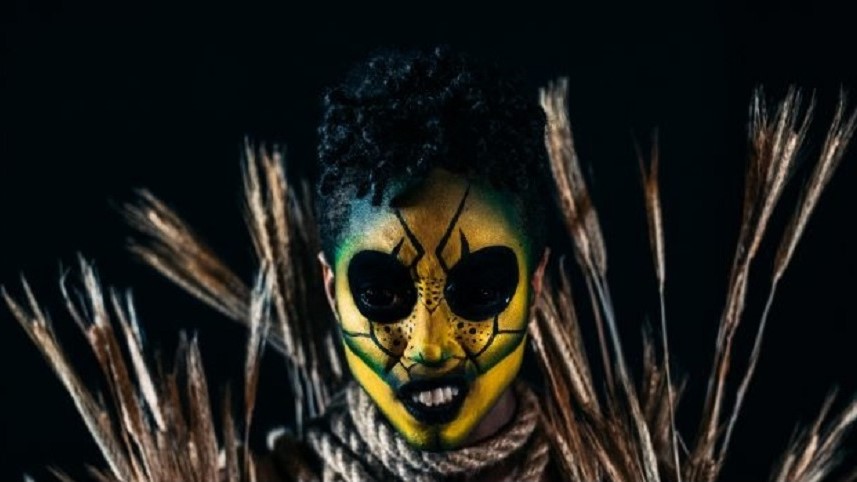 Brother Insect is a simple and playful attempt by two non-binary performers to take audiences out of their comfort zone, away from racial sensitivity and political correctness and into a space of equality based on truth, however uncomfortable. Opening with a conscious delinking from “narrator” – a word which, in storyteller Sea Sharp’s mouth, carefully emphasises “orator” – the play moves instead towards a demonstration of oral narrative as storytelling. The storyteller (Sea Sharp) and the actor (Michelle Tiwo) play extraterrestrial insects from whose perspective ludicrous division and stigmatisation on the basis of racial difference are revealed to be as absurd as the little rebellious insect whose words resonate through sound and shadow-play.

Tiwo is delightful to watch, their impressive moves, deep and pondering gaze, and play with body and voice adding another layer to the simple plot. The rope which represents the actor’s coiled dignity is insightful, poetic and creates a fascinating space for engagement with audience members. Tiwo’s dramatic skill allows the imagination to conceive of extra bodies with whom they share the space – the privileged brother with twelve prying eyes, the shadow ancestors that haunt the walls of the theatre, and the actor’s own trauma and memory, embodied in the words “I keep growing trauma in the dark hollow chambers of my heart.”

Writer and creator Sharp is both outside and within the play, again challenging the boundaries inherent in our conception of space. They are at once story-teller and story-maker, their scream visibly disrupting the rhythm of Tiwo’s movements and the dialogue between actor and “brother insect” – whose presence is implied by the audience – as well as their own reliving of the past.

The ideas behind the play are deliciously allusive, abstract and absurd. However, the production is poor, blunt, and lacks the poetic vigour which could have made Brother Insect as thrilling as it has the potential to be. To point the finger at audience members and claim that the actor can “tell” what they are thinking can come across as either a lazy effort or a chance to trigger highly provocative questions – this time, unfortunately, it was the former.

Brother Insect is at Camden People’s Theatre from 13th November until 14th November 2019. For further information or to book visit the theatre’s website here.