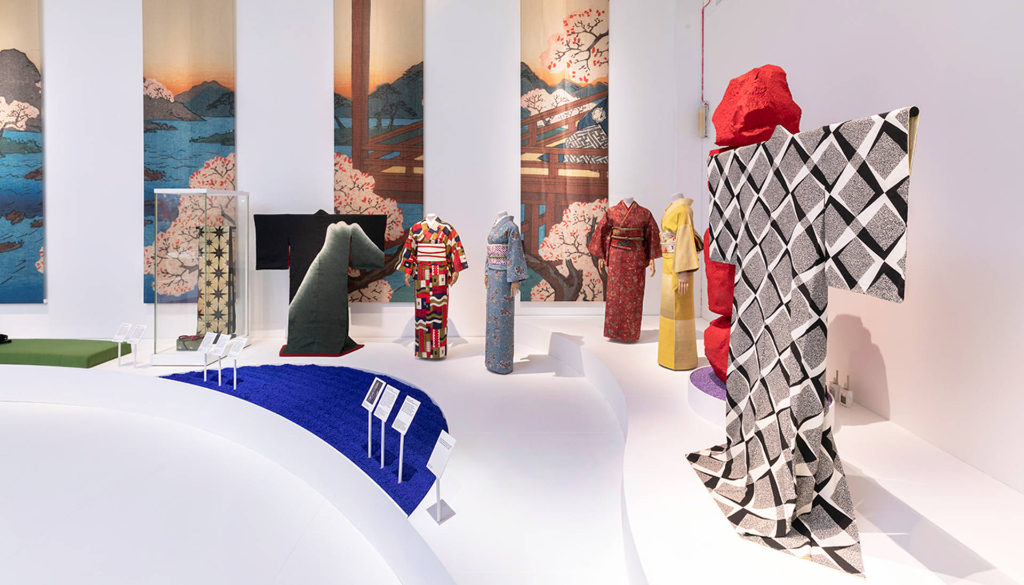 Kimono: Kyoto to Catwalk at the V&A | Exhibition review 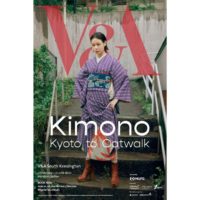 The kimono, that icon of Japanese fashion, is often viewed as an item of clothing somehow frozen in time through the centuries. This ambitious new exhibition at the V&A throws itself into disproving this Western misconception. With the Tokyo Olympics on the horizon, the museum’s timing is impeccable. Curated by Anna Jackson, Keeper of the V&A’s Asian department, the show brings into focus the kimono’s origins and evolution. There are more than 300 works, including paintings, prints, films and dress accessories.

Jackson states: “From the sophisticated culture of 17th-century Kyoto to the creativity of the contemporary catwalk, the kimono is unique in its aesthetic importance and cultural impact, giving it a fascinating place within the story of fashion.”

Literally translated, kimono means “the thing to wear”. The term was only adopted in the mid-19th century to describe a straight-seamed piece of fabric that the wearer wrapped left side over right before securing with a sash called an obi. Prior to that, the garment was known as a kosode, meaning “small sleeve”.

The exhibition begins in the Edo period in Japan (1615-1868), a time when kimonos were worn by everyone in the country, regardless of age or gender. Social position was determined by stylistic characteristics. An example can be seen in the outer kimono for a young woman (uchikake). Dating from 1800-1830, it was worn by a woman from an affluent family, the long sleeves indicating her youth and unmarried status.

Another memorable aspect of this exhibition is the woodblock prints. In Utagawa Toyokuni’s Fireworks at Ryogoku Bridge (Ryogoku Hanabi No Zu, 1820-25), crowds gather to watch a firework display on a summer evening. Many figures are wearing the then fashionable kasuri kimono.

As the show continues, the visitor learns how the kimono found its way to Europe. In the 17th century, traders from the Dutch East India Company in Japan started to bring padded kimonos back with them to Holland. Lightweight and warm, these dressing gowns were named Japanese rok. They grew in popularity and began to appear in portraits like Gerard Hoet’s oil painting of Anna Elizabeth van Reede, of Zuylen castle (1678). The aristocrat appears as an arbiter of good taste in a kimono-style silk gown, embroidered with chrysanthemums and blossom. Europe’s wealthy elite were, by the 18th century, appropriating kimono style into luxurious dressing gowns, such as that made for Sir James Dalrymple in 1711, on loan from Scotland.

During the second half of the 19th century, Japanese culture held Europe and the United States in such a state of rapture that the term “Japonism” was coined to describe the phenomenon, with art like ukiyo-e famously inspiring the Impressionists. It followed the reopening of trade with Japan in 1858. One sees the kimono being influenced by the West at this juncture. The mechanised textiles industry, industrial chemical dyes and Art Nouveau had a significant effect on Japanese fashion.

From the beginning of the 20th century, Parisian designers began to draw on the graceful draping form of the kimono. Pioneering figures like Madeleine Vionnet and Paul Poiret were creating designs consisting of straight lines made by sewing together rectangular-shaped material. The lessons Poiret acquired from the kimono are evident in his draped, yellow wool mantle from 1913. The falling fabric wrapped loosely around the body contrasts with the Western tendency to emphasise the body’s curves.

The V&A’s consideration of the kimono reaches a thrilling climax in the final room. Mannequins displaying modern interpretations of the kimono from the post-war era onwards have been arranged around a giant mock-bonsai tree resembling an ornamental garden. The kimono’s recent resurgence on the streets of Japan is explored here.  A feast of creativity offers the visitor designs by some of the biggest names in international haute couture, alongside major figures in Japanese fashion like Rei Kawakubo. Highlights include the scarlet outfit designed by Jean Paul Gautier for Madonna’s Nothing Really Matters video (1999), the Alexander McQueen dress worn by Bjork for her Homogenic album cover in 1997 and the legendary kimono-inspired, threadbare-cloth robe worn by Sir Alec Guinness for his portrayal of Obi-Wan Kenobi in Star Wars: Episode IV – A New Hope.

One can also admire the Oscar-winning costumes for Memoirs of a Geisha. Whereas previously in this exhibition, the rare and fragile garments and artefacts are behind glass, in the final zone there is a more open feel. The last room features a montage of kimonos on film, including a clip from Akira Kurosawa’s masterpiece Seven Samurai (1954) and footage of David Bowie performing in the 70s in a gender-fluid outfit. The kimono, the ultimate symbol of Japan, emerges from this exhibition as a historic, fluid, dynamic and ever-evolving icon of fashion.

Kimono: Kyoto to Catwalk is at the V&A from 3rd March until 21st June 2020. For further information visit the exhibition’s website here.