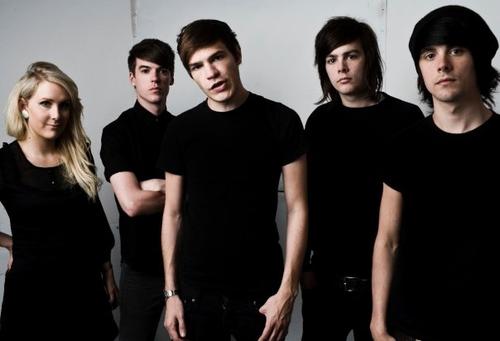 Before Hadouken! take to the stage at the iconic Ministry of Sound venue tonight we had the chance to catch up with band members James Smith and Alice Spooner for the latest news from them and what they have in store for the future. I’ve heard you guys have been at it; working non-stop so when is the new album out?

Oh brilliant, and you’ve been signed to Ministry of Sound. How’s that working out?

J: Really well! They’re obviously quite an iconic label so we’re really proud to be a part of their legacy – they’ve got a really good track record and they’re really enjoyable to work with.

Yes – Wretch 32, Example and DJ Fresh are all producing number one hits so it must be cool to be a part of that. Is there any creative restraint at all since you’ve changed label?

J: I wouldn’t say so. The guy we work with – David, really pushes us to the next level. He’s always asking us if we can better the track but doesn’t have any say on what direction we’re taking. He lets us make our own decisions. Working with them I find you don’t get trapped or frustrated.

Both singles, Parasite and Bad Signal, have been named hottest records on the planet by Zane Lowe on BBC Radio 1, which is obviously great. We noticed that both seem quite dubstep-influenced. Is that what to expect to see on the rest of the album?

J: Not really actually, Parasite has that bass line figure going on but is more of a drum and bass record and Bad Signal has a dubstep vibe but that’s about it for the rest of the record – it has more of a house tempo.

OK, we also noticed that you gave Parasite away for free. A lot of artists around seem to be doing that at the moment, is that only for promotional reasons?

J: Well it’s a good way of getting it out there, we haven’t had a record in about 2 years and we wanted to get back in everyone’s faces without having to charge people for it.

Alice: we started five years ago, giving away That boy, that girl and other records for free on Myspace and it didn’t do us any harm. It spreads so much easier that way.

Obviously you guys did a lot of remixing back in the day – for Plan B and Bloc Party. Are you still enthusiastic about that? Will we see any of it in the future?

J: Yeah we’d love to do some remixes, we just have to wait for the right record to come up and make sure we have the time to do it.

And the grime scene was a big influence on you in the beginning, what artists made you incorporate that genre into your sound?

J: Early Wiley stuff, especially when he was producing, Musical Mob, Nasty Crew, a lot of the Rinse FM stuff.

What do you think of it now?

J: Don’t really listen to it anymore – it’s something I’ve grown out of but I still think it’s an exciting and strong scene.

What about the dubstep scene?

J: I really like that party scene, not so much dubstep but the artist surrounding dance music – especially from America. They really put on a show.

And you’re playing Reading this year! Does it ever take it out of you, all the touring?

A: yeah we’re pretty pumped about that. There was only one time when we did a stint of 3 months non-stop and there were like 14 people on a bus and it got a bit cabin-feverish and claustrophobic. But other than that we enjoy travelling a lot and seeing other parts of the world – touring is great fun.

Listen to the hot single Parasite by Hadouken here: