On Friday night at the Queen Elizabeth Hall, the Meltdown Festival audience had the pleasure to see Schrei 27, the first major film collaboration between Diamanda Galás and Italian filmmaker Davide Pepe.

Based on her radio piece from 1994, a co-commission of New American Radio and the Walker Art Center, the work deals with the institutionalisation of an individual whether for political or personal reasons, and their physical and mental torture.

For this project Galás researched Ewen Cameron’s mind-control experiments for the CIA, experiments on the severely disabled at Willowbrook on Staten Island, death camps in Greece for traitors to the state, places such as Dachau or El Ntampa (El Daba), as well as drawing on her own experiences in an artists colony in Italy, where she was working on a piece about institutionalised torture and found herself in the very same situation. 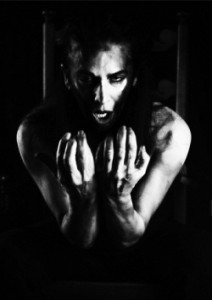 As the artist herself has stated, she had waited 20 years to find the right collaborator, someone who could handle her audio-performance work and create the visual analogue to it. And what we experience watching Schrei 27 is, in fact, the ultimate symbiosis of audio recordings and image, amounting to an emotionally engaging and utterly disturbing work.

“Schrei”, as described by Galás, “means ‘shriek’ but it can mean a shriek that’s the sound of objection, or the sound of funeral mourning, the rape or torture; the shriek of an animal that is repeatedly attacked within a confined space.” It also links to the Schrei Theatre; an early 20th century German expressionistic, ecstatic performance that became one of the crucial formal and aesthetic inspirations for this project.

The video consists of several short performances over the space of 27 minutes, chapters of a confession induced through sadistic chemical or mechanical manipulation of the human body. In a restricted space with randomly triggered light, heat and cold, beatings or rapes, a patient (here Diamanda and Salvatore Bevilacqua) is subjected to medical torture.

The most unnerving vocals, everything from glass-breaking walls of soprano to a feverish whisper, shrieks and multi-layered groans, manifest tremendous fear and unbearable physical pain. And it almost feels that Galás takes it one step further in challenging her audience, delivering to those less tolerant of extreme sound, the torture itself.

Beautifully crafted collages of black and white, grainy close-ups of a tormented body, X-rays, and medical photographs of Diamanda’s own vocal chords, appear simultaneously with music. Twelve of those violent and hypnotic clips are separated by a series of images, Galás’ drawings and paintings, that suggest hallucinatory states experienced by the brain at the time of terror.

Davide Pepe’s mesmerising images shows the human body as an abstract “body landscape”, whereas its movement and light follow the sound vibrations of Diamanda’s voice with utter perfection. Schrei 27 is a very violent piece, psychologically as well as visually, uncompromisingly attacking the nervous system of the viewer, altering consciousness. It will not be to everyone’s taste, but it is important to experience it. Although according to 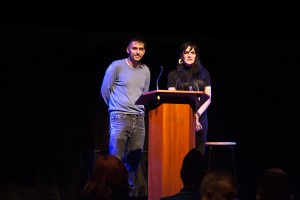 both artists’ statements this is an autobiographical, self-directed and auto-cathartic piece, it still speaks strongly of the human condition in our times, as well as challenging the contemporary art world with its powerful integrity and honesty.

The film projection was followed by a lecture and Q & A panel, where both Pepe and Galás openly, and not without the humour, shared with the audience the story of their friendship, and talked about artistic practice and the creative process of Schrei 27.

Watch a clip from Schrei 27 here