Deadly is the Female: learn how to stand out from the crowd 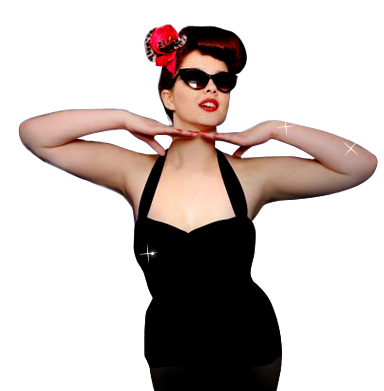 Deadly is the Female: learn how to stand out from the crowd

If you feel like you were born in the wrong decade and have a passion for the pin-up and burlesque style of the 40s and 50s, there is a shop that can bring you back to those glorious days.

Deadly is the Female, opened by Claudia Kapp in 2008, is a boutique in Frome specialising in clothing, accessories, jewellery and make-up to recreate that glamour look. Vivienne Westwood, Thrashy Diva, Pin-up Couture and Bernie Dexter are amongst the brands in the boutique to help you bring out your inner femme fatale.

Kapp studied Fashion and Textiles at the London College of Fashion and started working for a small young fashion company. Everything started when she visited Frome, in Somerset, where she took interest in the independent shopping spirit. Four months later she decided to leave her job in London and opened the shop, the website was launched shortly after the opening.

The image promoted has wide implications. Women are curvy and those shapes shouldn’t be the source of insecurities, just the opposite. As the owner said: “We have some styles, which are cut to allow for generous curves, but also styles which will help give the illusion of more curves. Where possible we try to stock a wide range of sizes with some dresses being available from an XS to a 4XL, and we are proud to say they look knock-out on ladies anywhere in the size range.” She would love to see a wider differentiation in magazines and on catwalks, but she is far from saying that some body shapes are better than others.

Deadly is the Female has an overall concept that runs though all their pieces, getting inspiration from the past, these clothes have an everlasting charm suitable to all the seasons and ages. The new spring/summer 2013 collection is particularly focused on floral patterns. Considering the growing demands, the brand increased their swimwear range.

According to Kapp’s words, the style suits women from different age groups. She said: “One of my favourite things about Deadly is the range of people that shop with us. We have customers of all ages, easily from 17 to 70. Some are passionate about vintage and regularly dress in a vintage style.  Others are just interested in looking glamorous whether it is to work, a ball or at the pool. We love that people come to us when they want to stand out from the crowd.”

Right now Kapp is mainly focusing on increasing her presence online, but she also looks forward to going back to her designing roots and being able to create a brand out of Deadly, because “nothing beats being creative and seeing an idea come to life”.

British food writer, journalist and broadcaster, Nigella Lawson wore a red dress, purchased from Deadly is the Female in January, during the first episode of the US TV show The Taste.

For further information about Deadly is the Female click here.