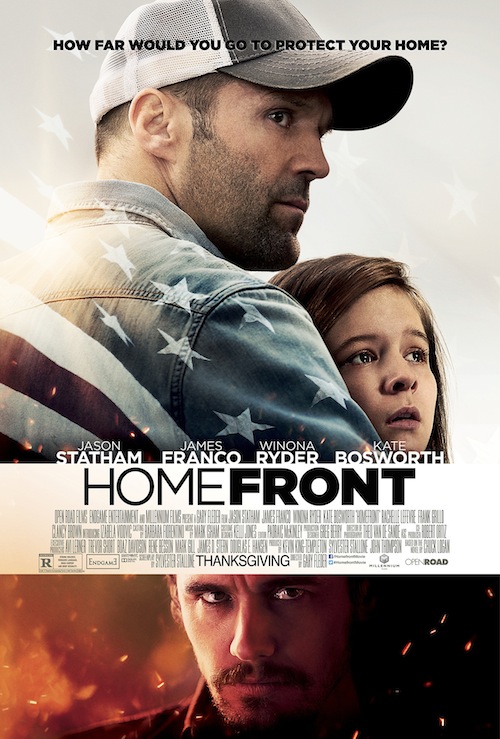 Former DEA agent Jason Statham relocates to a small, peaceful town with his daughter, looking to rebuild his life after the death of his wife. However, the past has a way of catching up with him, and it’s not long before he’s caught up in a battle of wits with the local crystal meth dealer. So far, so familiar, but Homefront has a couple of elements, which may surprise you. Firstly, the screenplay comes from Sylvester Stallone, and secondly, James Franco plays the meth druglord. Stallone wrote the movie over a decade ago, and it’s certainly a tighter, more focused feature than his recent Expendables outings. Much like his Oscar winning Rocky, the film hones in on a salt-of-the-earth family man, battling against seemingly impossible odds. Fortunately for Stallone, in Jason Statham the film has a leading man possessed of the quiet charisma to carry it off. He may dispatch a plethora of bad guys with his customary aplomb, but Statham is equally adept at building a genuine, touching relationship with his on-screen daughter.

As his foe, Franco is obviously having a ball. As witnessed with his recent turn in Spring Breakers, he’s an actor willing to give anything a go, and he’s always an entertaining watch. His character of Gator is mostly all front: a relatively small-time dealer whose violent façade begins to slip once a major criminal from Statham’s past arrives on the scene. A whiny loser more than a really threatening screen presence then, but still eminently easy to hate.

Homefront doesn’t rewrite the rulebook but it’s a solid exercise in action cinema. The supporting cast is rounded out by the likes of Winona Ryder and Kate Bosworth, the latter banishing any doubts over her acting ability with a turn as Gator’s drug addicted sister. Director Gary Fleder’s unfussy style keeps things moving at a brisk pace, and he allows the action scenes to play out in a pleasingly visceral manner without snappy cuts every two seconds. Most importantly, Stallone’s script has captured some of the genuine heart from his 70s heyday. It’s doubtful whether that same heart will make an appearance in Expendables 3.

Watch the trailer for Homefront here: