Trust at the Gate Theatre 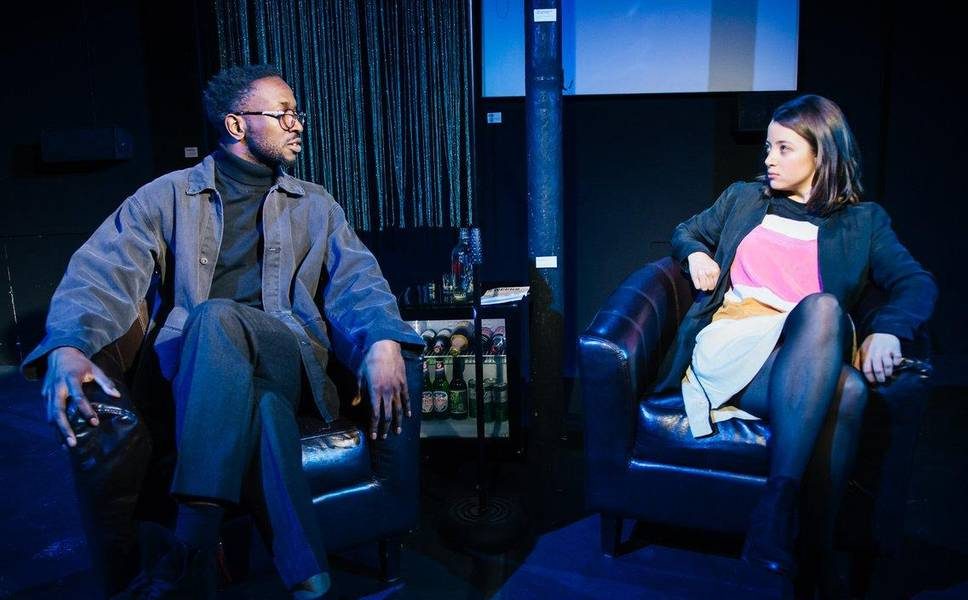 At its best the Gate Theatre’s production of Falk Richter’s Trust achieves a synthesis between romantic insight and macro-economic collapse that puts it in the same ballpark as Radiohead’s OK Computer, especially Fitter Happier (that latter comparison is meant as a compliment, not shade). At its worst – and sadly the show is at this end of the spectrum more often than not – the play devolves into a series of flimsy sketches stitched together with a lethargic attempt at anarchy.

Couples rise and fall and rise again with the speed of dark pool algorithms. An ingenue sits at her dresser promising that she only needs another $4 billion, that “by Monday afternoon in three weeks’ time” she’ll be a completely different person. Dense treatises on hedge fund management compete with forlorn lovers and a video of a dog in a shark costume on a Roomba. A broken-hearted man tries to bark his way back to happiness. It’s the contradictions and compromises involved in maintaining a toxic relationship, be it with an unsuited partner or the chokehold of late capitalism, because “it’s too complicated to change it now”.

Richter’s script is like a collection of flash-fictions and experimental short stories, the raw materials for a piece of theatre rather than a hard blueprint. Director and performer Jude Christian has chosen to emphasise the segmented structure of the text, each new subtitled scene a chance for her to dip back into her toolbox.

Audience marriage proposals, Mandarin lessons, a sleep-masked interlude, video projections, on-stage yoga, acoustic guitar covers – just a taster of the tricks Christian employs. One gets the sense watching it that the production should be redolent of messing about on your phone, rapidly flicking from app to app, tab to tab.

Yet, Trust ends up feeling like its being played at half speed, with laborious scene changes, a lack of clarity in regard to how it’s all meant to hang together, and, Christian aside, some weak performances making the show a bit of a slog to get through. It’s a constantly shape-shifting collage of contemporary crises on levels both personal and political, a series of thematic Molotov cocktails crucially lacking the spark to light the soaked rag.

Trust is at the Gate Theatre from 22nd February until 17th March 2018. For further information or to book visit the theatre’s website here.

Watch the trailer for Trust here: