Ploutos at The Space Theatre 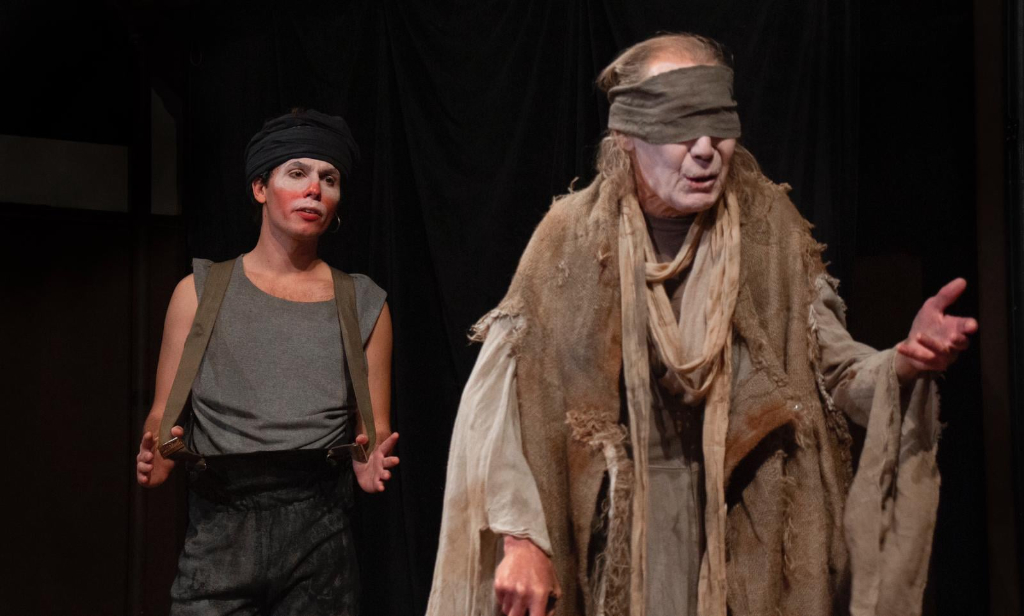 The Space Theatre reopens this week with Thiasos’ Ploutos, a comedy as resonant in the shadow of Canary Wharf as in any amphitheatre. The venue is a rare untouched building in the Isle of Dogs, a suburb of new builds and flats that, beside the imposing city district in the near distance, gives one the impression of travelling back in time. In Aristophanes’ play, farmer Chremylos (Charles Sobry) has been instructed by an oracle to take the first man he sees home to Greece. The blind beggar (Oengus Mac Namara) that he and his slave Carion (Salv Scarpa, in Redmaynian form) drag along turns out to be Ploutos, the physical personification of wealth. Cunning Chremylos restores the eponymous character’s sight, riles up citizens to banish Poverty, another god, and thus sets in motion a riotous display of revelry.

At last, a piece of real theatre! Not a monologue that reflects our times, not a live stream, but a  physical production put together with heart by a company who knows their text and how to make it sing. This version of Aristophanes’ satire brings nothing new to the table. But that’s because the lively, playful elements that Thiasos throws into the pot are as old as Ancient Greece – and they still hit. The theatre troupe subtly builds a vast allegorical world on stage – by introducing the chorus of peasants, who speak as one and even become a barbershop quartet, for instance, and then in Act 2 reintroducing those performers individually as ghastly gross manifestations of wealth. The great Mac Namara plays Ploutos and Poverty with a versatility and command that the company is clearly in awe of. With an incredible face of stone, his experience over the rest of the cast aptly looms for the man who can take on the mantle of playing two gods without batting an eyelid.

David Wiles’ translation doubles down on couplets but sauces up the punchlines – for an audience that doesn’t mind a few fart jokes. Theatre should be for the masses, after all. The directors, Yana Zarifi and MJ Coldiron, sculpt their strong cast into a glorious geometric tableau, with vibrant costumes designed by Abd’Elkader Farrah making those performances pop even more. Meanwhile, moving, full-throttle music written for the show by Manuel Jimenez and Faith Elliott carries the comedy from sketch to sketch. The qualities of Ploutos, by the indelible Thiasos company, are too numerous to detail here, but this production certainly brings The Space back in extreme style.

Ploutos is at The Space Theatre from 29th September until 3rd October 2020. For further information or to book visit the theatre’s website here. 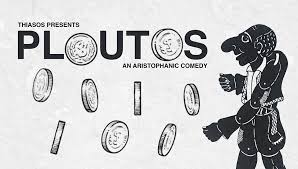