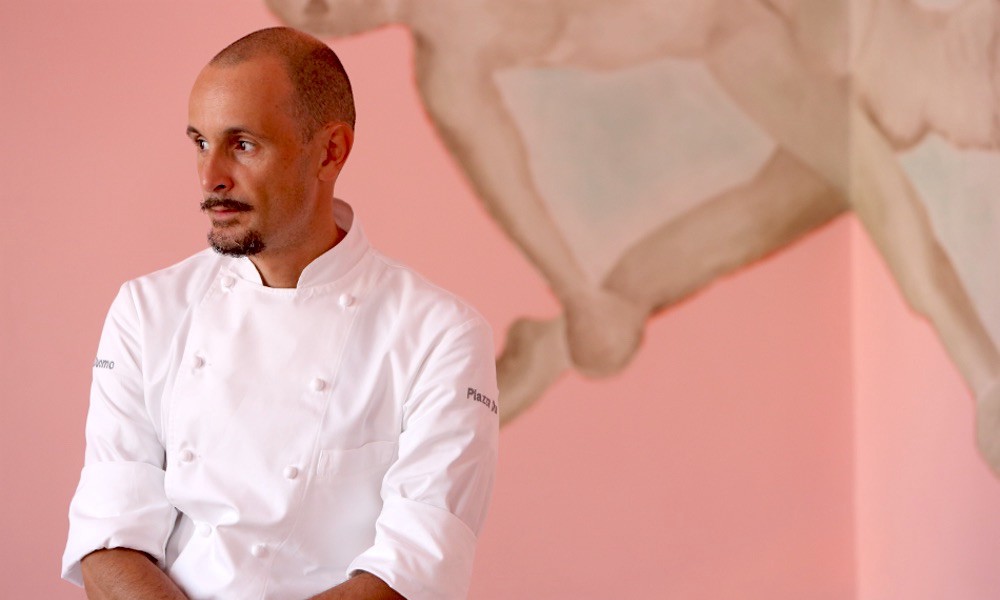 Hailing from the land of white truffle and Barolo, Enrico Crippa is one of Italy’s most acclaimed chefs. He worked with the world’s best cooks  – Ferran Adriá, Gualtiero Marchesi, Michel Bras –  and now he is one of them, holding three Michelin stars at his restaurant, Piazza Duomo in Alba. We had a chat with him about his staying in New York, how creative he gets with white truffle and what the list did for this restaurant.

Hello Enrico, I imagine you are excited about being in New York.

Yes. Up until last winter I’ve never been in the US, I came here on holiday in January and now I’m back here in New York. I have gone from nothing to twice in a few months…

You’ve worked with restaurant Contra in the East Village on a special lunch yesterday and also a dinner tonight. How did this come about?

Yes, we have many relationships with New York because the Ceretto family [co-owners of  Piazza Duomo] involved architect Bill Katz when they built the restaurant. Bill drew in other avant-garde architects and also other local artists who designed the crockery of our trattoria, La Piola. On top of that we have many relationships because of the strong presence in the US of the wine of the Ceretto family. It was a good opportunity to invite our American friends and the artists who we are going to honour. We wanted to do this in a place that would fit in terms of cooking style and also philosophy. Contra is simpler than the classic, high-end restaurants here in New York. So yesterday we did a great lunch together, tonight we have a dinner and tomorrow I’m going to wander around New York, waiting for the results of Monday.

Did you ever consider opening a simple but trendy restaurant abroad?

It would be extremely fun and I love the philosophy of these restaurants, even in this neighbourhood specifically, which is so young and up-and-coming. I really appreciated the “big city” life, I did it when I was younger, ten years ago. But now I’ve become part of the environment where I live and work: the green, the seasons changing… A big city couldn’t offer me that. But the concept [of these restaurants] is amazing and there’s great freedom in New York, freedom of expression. It’s so interesting.

Let’s not forget that you come from the land of white truffle and Barolo. Are they very present in your menu?

Yes, working in Alba, when the white truffle is in season you must use it. It’s an amazing opportunity for me to use white truffle and pair it with the king of Italian wines: the Barolo. However, my cuisine does not focus exclusively on that. It’s so important, the white truffle, that you don’t want to be too creative with it, even though there’s room for that. When you talk about it, customers want to have it every time with traditional pairings: tagliolini, raw meat, eggs… they don’t want to risk ordering something too creative. They are scared it wouldn’t be the right thing to do to enjoy it. They stick with the tradition of Piedmont – which is amazing.

What’s the most creative dish you came up with with white truffle?

Last year we did the all’Albese raw meat with shavings of white truffle on top. It reminded of the pairing with the classic battuta di carne al coltello, but with a different flair. The most creative thing I did… the cream of potatoes of Alta Langa with quail egg smoked with Lapsang Souchong – which is a black tea – and white truffle on top. When truffle is in season we have it on the menu. During the year we still serve the dish, just without the truffle. It’s still very interesting, and it features the classic egg/white truffle pairing. The most interesting thing is that the relationship between me – that I’m not from Piedmont originally – the land and the truffle is possible thanks to the Lapsang Souchong which comes from far away. We also did it here in Contra.

Some may not know about the seasonality of the product, did they expect you to bring the truffle in the suitcase?

(Laughs) Sadly but also luckily white truffle is not in season now.

When you entered the 50 Best, what did it do for your restaurant?

The list brings you an international clientele. Not that we didn’t have it in Alba, thanks to the wine, but these are new, younger, more libertine, more fun and also very knowledgeable customers. Especially outside the white truffle period, the list broadened the “season” of international diners for us.

This year, in theory, there will be four Italian restaurants [Combal.Zero is expected to be in the 50 because it wasn’t listed in the 51-100 list announced this week], and two of them are in Peidmont.

Ok so, I don’t know anything about that and I like to find it out on the day of the ceremony, when we all meet in the room and we see who is present. Last year there were three restaurants: Bottura, us and Alajmo. Scabin of Combal.Zero was around the 60th position, it would be amazing if he was back in the 50. Three restaurants isn’t enough for Italy. If I see him on Monday then it means it’s true and I’ll be so happy, he absolutely deserves to be in there.

And finally this year the front of house gets an award.

Yes, the front of house is always neglected but it’s fundamental in the restaurant dining experience. It encourages our manager, sommelier and waiting staff to do better and better. It’s a great thing and a great motivation. We’ll see who wins that. I have to say that whether you go up or down in the list, the main thing is being in the 50. If I were to go up, I’d be incredibly happy even if we just moved from 27 to 26. Slowly, slowly you do great things. Being in the list of the 50 best restaurants in the world! Just try to think about how many restaurants there are in the world, it’s already a massive result. The fact that this year there’s also attention to the front of house, it makes the event extra special.

What did you do at your restaurant to get so high in the rankings?

We do what we always do. We work hard, we welcome our customers properly. Every single day we put in the same energy and effort, which is a key element. You talk with your guests at the end of their meals and looking at them you see their eyes shining, and they congratulate you with honesty. So far, this philosophy has always been rewarded. It’s our job, we don’t travel much, we don’t have time to travel, we prefer to stay there, focused on Piazza Duomo and the Langhe. Customers come to us, which is great.

Did the list give you the opportunity to work with other international chefs?

It’s difficult for us to move away from Alba, apart from this week which was necessary to come here for the ceremony, and we did some collaborations. But we did our own thing rather than teaming up with other chefs from the list. My colleagues on the list, I know them all, they are amazing professionals, but I prefer to stay focused on what I do in Alba. If I travel then I have to close the restaurant, so I don’t travel around. It’s our business choice, we want to concentrate on what we do where we are.

What are the new projects for Piazza Duomo?

At the moment we are expanding our vegetable garden. We actually have other projects with the Ceretto family in Alba but I can’t reveal them yet – incubation period.

Last two questions… when was the last time you had a memorable meal?

Last night I went to Dan Barber’s Blue Hill at Stone Barns. He has a farm with animals, a vegetable garden…it’s a philosophy very close to mine, vegetable-oriented. He’s doing such a great job on this farm. I think he is doing something incredible. I’d love for him to visit me in Alba and to show him what I do.

Who are you going to support on Monday?

Obviously Massimo [Bottura]. If he goes first, we all win. I told him that if he gets to the top we are going to have a once-in-a-lifetime party here in New York – he responded very vaguely, he doesn’t want me to jinx it! He deserves it and it would have a great impact on the entire Italian movement. 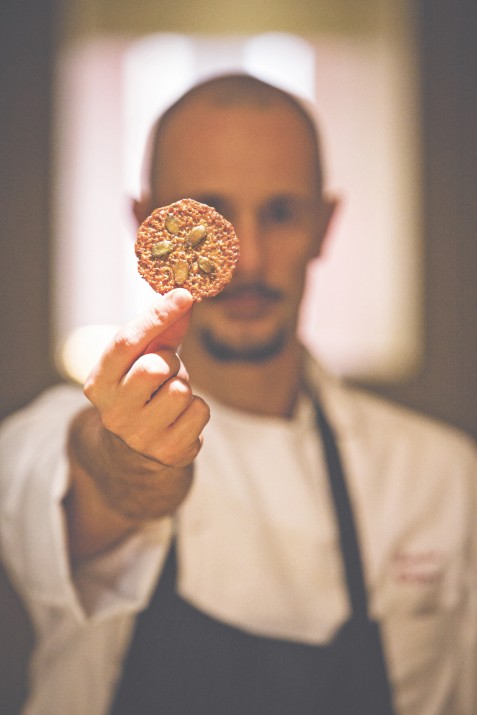 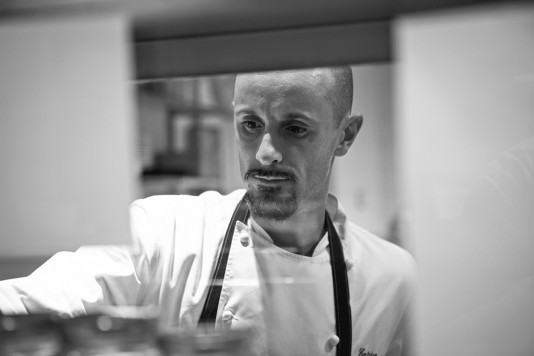 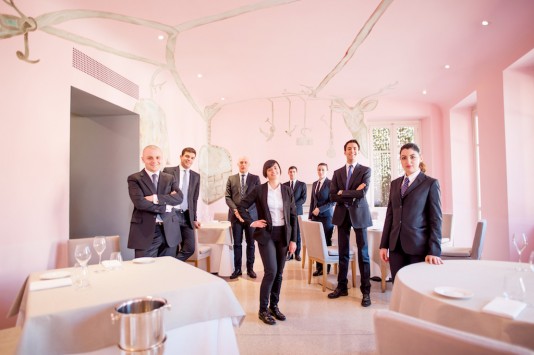 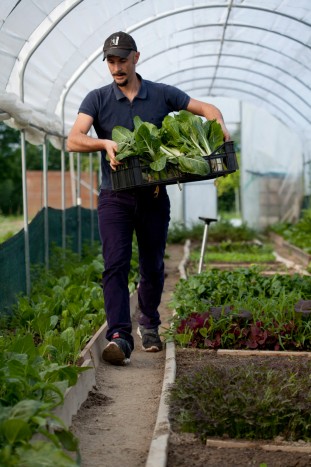 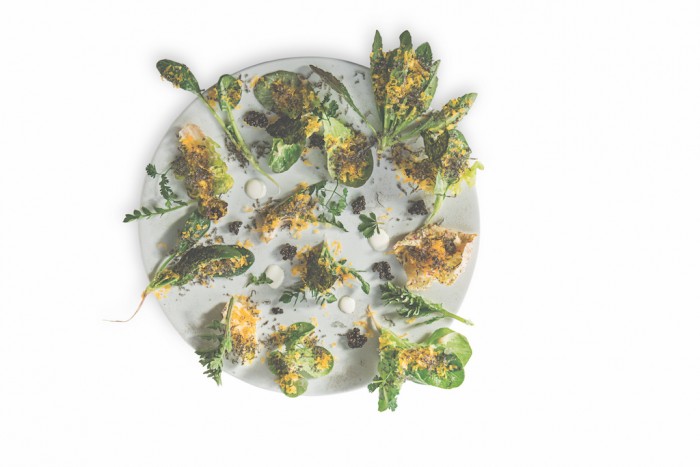