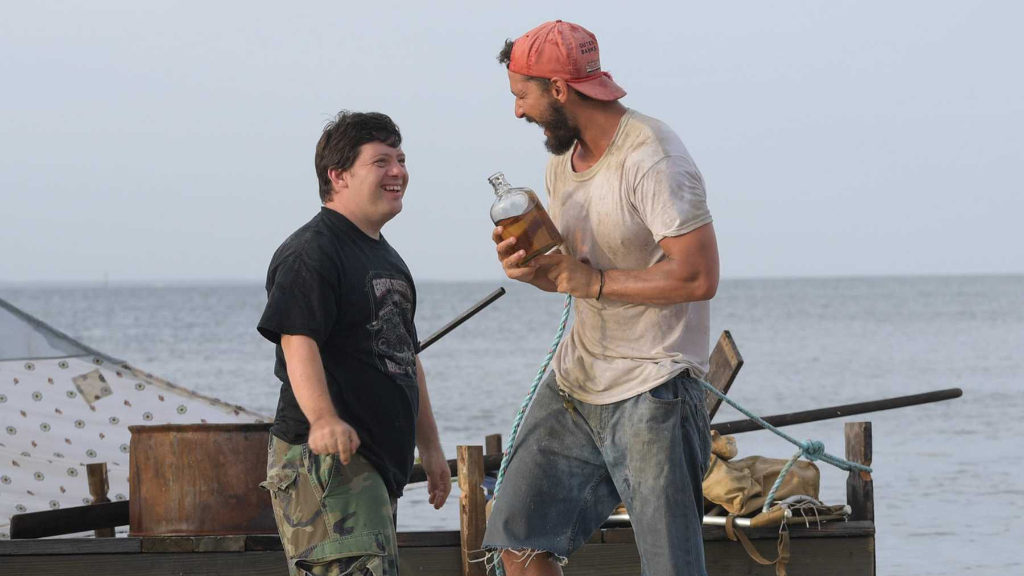 The Peanut Butter Falcon is a Mark Twain-esque fable, a charming adventure about finding love after loss. It tells the story of Zack, a man with Down Syndrome who escapes from the community centre to pursue his dreams of wrestling, following his journey as he crosses paths with outlaw fisherman Tyler (Shia LaBeouf) and support worker Eleanor (Dakota Johnson). We sat down with writing/directing duo Michael Schwartz and Tyler Nilson to discuss how Zack inspired their film, their joy over its success and how they formed a genuine on-set family.

What drove you to write this adventure story in the first place?

Michael Schwartz: Me and Zack had been friends for a couple of years, and he wanted to be a movie star. So he asked us to make a movie with him. So it started with Zack, and then we are pretty adventurous guys, and Tyler grew up on the outer banks, so it was sort of a question of what we could get for free – we could get boats for free, build a raft out of trash – and then we built a story with those pieces. It’s like Chopped, where they give you a bag of ingredients and you have to make a dish out of it. We had a list of ingredients and we had to figure out how to put it into a story.

Did you find that the Mark Twain influence sprung naturally from that?

MS: It came naturally from that. We had those elements, and then we wanted the film so feel timeless, so I think it naturally feels a little bit like classic literature, and the way we shot it isn’t handheld or bouncy, it feels classic Disney, which I think helps it feel a little bit more Mark Twain as well. But he does such a good job with humour and drama combined.

The film has a storybook style with magic realist elements. Were you consciously trying to make it this way?

MS: We wanted it to be a fable, for sure. We didn’t want it to be exactly real, but I think there’s a groundedness of authentic characters within a fable which is elevated. So we tried to build up to the scene at the end with other fantastical, fablistic moments, but the emotions were really grounded.

They are very three-dimensional characters

Tyler Nilson: Yeah, I mean everybody is flawed. In our story, everybody is looking to find family and that type of love and belonging. And for us, Zack was just a guy, so there never was a big charity element. It was more about “what would Zack do well?” and “what does Zack like?”. He has goals and he gets frustrated but he’s also happy and he’s also funny, so we put what we knew about our friend in the story.

Zack and Shia have an amazing chemistry onscreen. Were they also close on set?

MS: Yeah, we all had a family vibe. Tyler and I are the kind of dudes that invite people in. We are all in this together. Zack is disarming in his own way. He comes in in love with everybody and that really inspires people to feel safe. And Shia and Dakota really bought into Zack and were having rap battles and thumb wrestling; it felt like summer camp. And I think that bled into it feeling more authentic in front of the camera. We still hang out all the time in our group chat.

There’s a really interesting idea of family and freedom in the film. Did you want to explore find this balance between dependence and independence?

TN: Yeah, subconsciously. I think it maybe it came out in the work.

MS: Yeah, I think even the way I live my life, I don’t like having a nine-to-five job because I think there’s that sense of exploration and freedom that I felt I didn’t have, like I was trapped by the job. So I think it’s probably in there.

What’s the main message you want people to take from the film?

TN: I’d probably be excited if people take what they want from it. I wanted to make a movie with my friends and have an experience, and I’m really grateful that people like to watch it after we worked on it. I think there are some pretty common threads that run throughout the film, whether it’s family or friendship or freedom, whatever that is, I think it will be nice if people take what they need.

MS: Yeah, the thing is there’s a simple message of love. Sometimes I’ll watch the same movie years apart and take a new message every time, so it’s up to the audience. Whatever they need, I hope they get.

You’ve both worked together a lot before. You must know each other well?

MS: Yeah, we’re a team, we’ve been working together a lot of years. We started with commercials and short films, and this is our first feature. Sometimes I do all the talking, sometimes Tyler does all the talking. It’s nice. We watch out for each other’s blind spots. So if there’s something I’m doing that Tyler could do better then he does it or vice versa. It’s really nice to level up at every opportunity.

TS: Like, for example, Mike just picked up a handful of jellybeans, and I took them and poured them back into the jar because I knew that the sugar would make him crash later.

Your film has a really refreshing feel-good vibe. A lot of films in the festival circuit are bleak. Do you think it’s just as important to have these happy, hopeful stories?

TS: I don’t know if it’s as important, but I like to feel good, so I think that what we make tends to feel pretty good, but not saccharine. I don’t like seeing movies like that.

NL: And bleak and sad are two different things. Sad can have a cathartic end. I feel like we deal with true sadness: Tyler is dealing with the loss of a family member, Zack’s dealing with the loss of a family and Eleanor is dealing with the loss of a partner, and they all have issues but find light within them, so you have permission to be sad. But I think it’s really nice to think, maybe we’ll work through it as a team and come out the other side having gone through a catharsis. Bleak is just bleak, sad for the sake of being sad, and that’s just not what I want. Victimising yourself is not what I want. Whether your circumstances are a poor fisherman on a boat or a wealthy debutant that has lost a partner, or someone with Down Syndrome who doesn’t have a family to care for him, no matter what your circumstances are, we can team up and figure out how to get out of this hole. That’s why it’s a feel-good film, but those characters were starting off with some serious spiritual journeys that they had to undertake.

Mark Twain himself said that comedy and tragedy are intertwined

TS: Yeah, I mean humour can really stem from true pain after you cut it off.

MS: Pain plus time is funny. Other people’s pain is funny. It’s like the Plato rules of funny.

Are there any other projects you are planning at the moment?

TN: We have a couple of projects but really, it’s super cool that people are talking about the film and specifically Zack and Shia’s performances being award-worthy, and we’re just pumped about seeing how that goes, and no matter what happens, it’s been a real blessing. The fact that the film got made is a miracle and a blessing and the performances are really beautiful and I’m excited about the world possibly giving Zack a pat on the back about his performance. We were told by a lot of people for a really long time that someone with Down Syndrome can’t star in a film that makes money or is marketable, but the fact that the film has made a bit of money means that it’s marketable, and that fact that he can get recognition means that we can really blow some doors down as far as the representation of people with disabilities goes. So I’m excited about seeing that.

The Peanut Butter Falcon is released in select cinemas on 18th October 2019. Read our review here.

Watch the trailer for The Peanut Butter Falcon here: