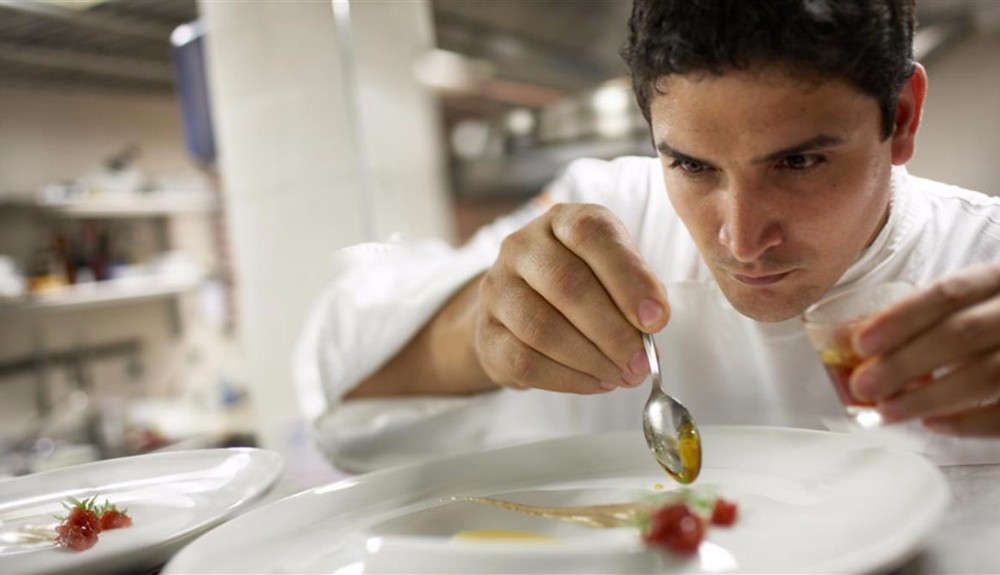 We caught up with Mauro Colagreco, the chef of Mirazur on the Franco-Italian border. Currently at 11th place on the list of the World’s 50 Best Restaurants, Mauro talked to us about collaborating with other chefs, visiting New York for the ceremony and his predictions for which restaurant could be number one this year.

The 50 Best Restaurants awards ceremony in New York is coming up very soon. Any thoughts in anticipation of this world-scale event?

It’s the first time the event is held outside London so there is a lot of expectation, a lot of impatience, to see what it will be like. Certainly, a lot of wonderful evenings, because it’s always a true party. I have always been impressed by this event, more than for the classification, for the true celebration of gastronomy. We all find our old friends, all the greatest names are there to have a good time. For me, it’s a true celebration of world gastronomy.

You are currently number 11 on the list, after an impressive 17-place leap in 2014. Do you feel this shift has tangibly influenced your business?

It’s true that we made a big leap, but after that we’ve been at the same 11th position for two years now. It did influence the restaurant’s reservations especially during the first year – quite a lot actually. We got a lot of reservations thanks to our position.

Being in the top ten is a big aspiration of many chefs. You are incredibly close, so do you feel a lot of pressure to make this next step forward?

We would love, of course, to be in the top ten, but I am already very happy to be among the 50 best restaurants in the world. It’s something that, when I left my home country Argentine for France, I would have never imagined, so this has already surpassed my dreams a long time ago. I am happy to be here, and my expectations are nothing more than to continue to have pleasure every time I open the doors of my restaurant.

You must be extremely excited about going to New York! What are you most looking forward to at the event?

I would love to be in the top ten of course! It would a great joy and a retribution of the teamwork during so many years. Other than that, of course, I’m very happy to see my friends again, to spend a few days in New York with my wife and family, go eat in the restaurants of people I admire and whose cuisine I appreciate. It’s a bit like going to celebrate and being on holiday at the same time!

Have you ever pursued a collaboration with a chef met at a 50 Best awards ceremony? Can you tell us about a memorable moment of sharing ideas with your colleagues at the event?

Right now I’m working on a project with two other chefs who are on the list, but it’s not being on the list that has made us close to each other: it’s because we have a lot in common. One is Virgilio Martinez from the Central in Peru and the other is Jorge Vallejo from Quintonil in Mexico. We called it “Origenes” (“Origins”), and it’s a project for which we have been travelling in different regions of Latin America. We spend four or five days living in villages with the original inhabitants, to learn the techniques and learn about products that are disappearing for cultural reasons, or that are so isolated no one has easy access to them. It is a very interesting collaboration project that also influences our daily activity at our restaurants.

Two iconic French restaurants, Le Chateaubriand and L’Astrance, have been voted out of the list, currently ranking 74 and 57. What may be the cause of such a big drop?

Actually, I don’t understand this. It isn’t the first time there are such drops in the list. I remember when I was at number 34 in 2009, and then I dropped to number 64 the year after. It’s enough that voters are more attracted to a certain type of cuisine that specific year, or simply that they haven’t had the time to visit the restaurants, for them to vote differently. It is a classification made also in response to a market. Today, it’s not enough that one has an excellent restaurant, people also want to know if you’re first, second, 11th or 70th…. For me, of course it’s good because it creates discussion around gastronomy, but it isn’t a truthful reflection of reality. How can you compare two completely different cuisines? For me, what is beautiful in today’s food scene is this diversity between one cuisine and another.

Do you think there is a chef that has been forgotten from the list but definitely should be on it?

I’m very frustrated for David Kinch, because he has been for many years between the 50th and 100th place, and for me he is someone who should be among the 50 best restaurants in the world.

The list has been criticised for its lack of prominent women chefs. Do you have a personal opinion regarding this, and do you think it’s still necessary to have a separate women chef prize to make up for the disparity?

I think that everything done to valorise women’s work in cuisine is good. I can’t wait to see more women chefs creating a buzz around themselves. For example, at Mirazur we have a lot of girls coming to work who are very brave and really have talent. It is a profession that excluded women for a long time, but today this isn’t the case any longer. According to me, it is just a question of time.

The 50 Best classification is extremely unpredictable, but everyone has their own ideas. Would you honour us and share your prediction on who you think will make it to number one? Without taking the question too seriously, of course, you never know until it’s announced!

I have no idea, really. Considering how it went last year, I would say maybe Massimo Bottura has a good chance of being the first, or maybe El Celler de Can Roca again, or perhaps Noma will make a powerful comeback after two years of shifting between second and third place. But frankly, all of them are such high quality cuisines that though I know them all very well, even I wouldn’t be able to rank them.